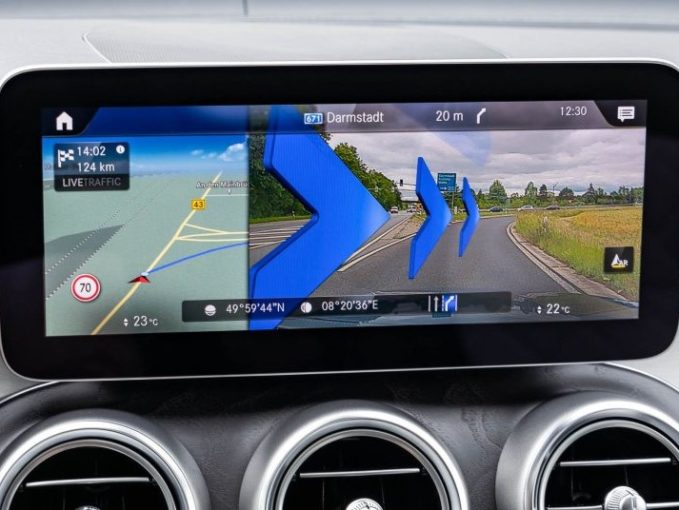 Car makers are always looking to strike gold with the next major advancement in automotive technology. Most recently, it was Tesla, who brought electric propulsion into the mainstream market with the Model S back in 2012. Currently, autonomy is thought to be the next big thing. In fact, just about every auto maker is pumping unfathomable sums of money into the development of self-driving cars.

However, one often over-looked contender for the car industry’s next major tech development is augmented reality, or AR. While AR doesn’t quite have the potential to introduce a paradigm shift in the way that self-driving tech does, it’s a technology that could easily become widespread within the next five years. Unfortunately, full autonomy (i.e., no need for a steering wheel) is still too novel to be introduced on a large scale in that time frame. AR, however, is right around the corner; let’s talk about why that’s so exciting!

What is AR?
Before we get into AR’s potential automotive implementations, let’s first understand what it actually is. AR stands for augmented reality, which is a technology that is capable of overlaying a virtual image onto your view of the real world. Obviously, AR cannot change your actual eye’s view of the world, but it can alter a virtual view of the world, such as one through a camera.

Once an AR program is given a view of the reality it wants to alter, it can superimpose whatever image it wants onto that view, creating a composite image that is part real and part virtual. It can then show this augmented reality on a screen that you can see, effectively giving you an augmented view of the world.

Current AR tech in cars
Now that we know what AR is, let’s talk about the diverse ways that it is currently being used. In the current field of automotive product offerings, AR technology is relatively sparse, though not completely absent. To my knowledge, there are two brands that are currently using AR in production cars: Audi and Mercedes-Benz. Mercedes’ latest MBUX system is able to use AR for navigation purposes by superimposing directional arrows, street names and other things onto a virtual view of the road ahead and displaying this view onto the center screen.

Skip to the 1-minute mark in this video to see how that works. Now, Mercedes’ system is cool, but Audi’s is the first to give us a true glimpse into what the future of AR in cars may have in store. Audi’s AR equipped heads-up display is able to do what Mercedes’ system can and more by projecting that important information onto the windshield. Audi’s AR heads up display is able to provide a view that looks like this. By overlaying these images and information onto the windshield, drivers are given a true AR experience. It comes about as close to augmenting our eyes’ actual view as you can get.

Future AR tech in cars
While both of these systems are very cool, they only give us a glimpse into what the future may have in store. As AR and camera tech advance, it’s reasonable to expect lots of additions and advancements to Audi’s AR HUD system. It would be equally reasonable to expect to see these types of systems in cars that wear badges other than the four rings.

For example, I expect to see AR HUD systems that can detect unusual driving behaviors from other motorists, and highlight them, perhaps in red, on your windshield. Additionally, an AR HUD could highlight road imperfections to help you avoid them, display traffic information to expedite your trip. Or even do fun things like add graphics when driving on track. This is all speculation, but that’s the beauty of the AR technology, its possibilities are as exciting as they are endless!