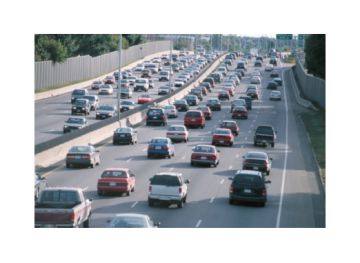 As dense cities struggle with packed roads and choking smog, officials are on the hunt for ways to get people out of cars and onto their feet, bikes, or public transit. One idea? Paying them off. And Washington, DC is thinking about doing just that.

A bill before the city council would compel employers who provide free parking to offer transit benefits (like a pre-tax bus pass) or a cash payment to workers who find another way to the office. The goal here isn’t to stamp out cars, but to let the non-drivers “cash out” the value of “free” parking.

Research suggests this sort of “parking cash-out” works. A series of LA-based case studies by UCLA urban planner Donald Shoup found these programs can decrease the number of drivers who motor alone to work by 17 percent, and increase rates of carpooling, transit riding, biking, and walking. A California legislative analysis found that if something like this were implemented statewide, the Golden State could reduce commuting travel by up to 43,500 trips and 0.08 tons of CO2 emissions per day. In a huge state like California, this is a dent. It’s also a nice start.

And yet, DC would be among the first big American cities with an enforceable cash-out program on the books. Turns out kicking parking is hard.

Part of the problem is that employer-provided parking feels gratis. It’s not. If employers don’t own their parking lots, they spend money and time negotiating contracts. “With most goods that you consume, you expect to pay for them—except when it comes to parking,” says Todd Litman, a transportation planner who heads up the Victoria Transport Policy Institute. “Otherwise responsible people who wouldn’t even steal a grape from their local grocery store take pride in circumventing parking fees.”

And “free” parking amounts to an excellent incentive for getting more cars on the road—about 25 percent more compared to when employees pay for it themselves. That might be fine for sprawling cities, but it’s less fun when you’re an Angeleno spending 104 hours in rush hour traffic a year. Places like this are letting consumers get away with not paying for something that, arguably, makes lives a lot worse.

“Trying to make driving harder to do is politically infeasible,” says Daniel Piatkowski, a regional planner with the University of Nebraska’s College of Architecture. “Making driving more expensive might impact more people, but it’s also going to impact all of the people that don’t have a choice. It’s going to hurt the people are struggling the hardest.” Cash-outs make it easier for workers on the fence about carpooling, cycling, or transit to go ahead and make the switch.

Mar 27, 2017connieshedron
Crash Fatalities Surge: Is Complacency Killing Us?A Day at Behind the Wheel Training: My Reconnection with Reality