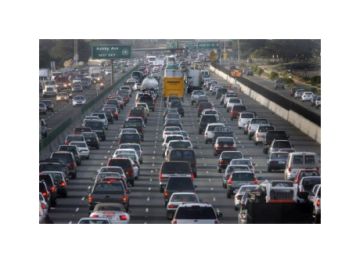 Andrew Salzberg, Uber’s Head of Transportation Policy and Research, this week declared the company’s support for road pricing, a plan that would have cities or transit authorities charge drivers for using roads during peak times.

Urban planners in recent decades have discovered that building more and bigger highways, surprisingly, doesn’t do much to reduce congestion (a phenomenon known as “induced demand”). Instead, as Salzberg puts it, “the cost of driving ultimately needs to reflect its cost to our cities.”

Such programs, also known as congestion pricing, have already helped reduce traffic in cities across Europe and Asia, but haven’t really caught on in the U.S.

Faith in the efficiency of markets, it seems, doesn’t hold up against a deeply-held commitment to unrestricted driving.

Uber has long positioned itself as a disruptor, not just of taxi services, but of transportation systems writ large.

The service has been given credit for declining car sales among millennials, for instance—though as CityLab points out, ridesharing services may actually increase road traffic. But advocacy for solutions to the worldwide epidemic of car-traffic congestion makes perfect sense for the image Uber would like to have.

Urban planners, for their part, would normally welcome a tech giant’s endorsement of a sensible plan that the American public and politicians just haven’t gotten on board with yet. Y Combinator and Elon Musk, in a similar case, have helped jump-start public debate on a Universal Basic Income. But given Uber’s increasingly tarnished reputation, this particular cosign might not be all that effective with lawmakers or the public.

And this isn’t altruism on Uber’s part, by any stretch. Salzberg is very direct in pointing out that Uber would benefit if congestion pricing encouraged more carpooling or multi-passenger ridesharing. The UberPOOL service is one of the easiest ways to do that—and Uber gets a cut of every ride.

Apr 3, 2017connieshedron
PG&E Joins with the National Safety Council to “Drive Awareness” of the Dangers of Distracted DrivingRunning On Empty With Run-Flat Tires