When Truck Drivers Tailgating is Actually a Good Thing 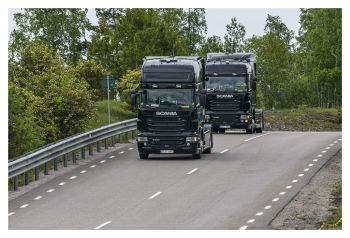 Tailgating will take on new meaning on U.S. highways this year.

Peloton, a start-up that partially automates tractor-trailers, is partnering with truck fleet management company Omnitracs to deliver its technology to U.S. roads this year. The companies are working on what’s called “platooning,” in which several trucks drive in close proximity to each other in a bid to leverage aerodynamics and save fuel.

The lead truck sets the pace and the other vehicles are programmed to match its speed. As the first tractor-trailer brakes and accelerates, the others follow suit. Drivers are still present in all of the trucks, but those in the back of the pack have to worry only about steering.

The trucks cruise at highway speeds while separated by 30 to 50 feet. The exact distance is based on how good a vehicle’s brakes are. Platooning is expected to trigger significant cost savings for the trucking industry. The aerodynamic benefits of trucks shadowing each other lead to fuel savings.

Peloton has found that the lead truck saves 4.5% on fuel on average, and the tractor-trailer behind it saves 10%. That’s a potential game-changer for an industry with tight profit margins and offers environmental benefits too.

The Peloton and Omnitracs solution can be retrofitted to existing trucks. A laptop-sized box is placed in the cab along with a camera that films the road ahead and a screen for the driver to watch. The screen alerts drivers when they’re near another truck they could be paired with. Drivers in a following truck can watch the screen for a live look at what’s happening ahead of the first truck.

The lead truck communicates its position to other trucks every 30 milliseconds via radio signals, which let the trucks behind it know when to accelerate and brake.

Peloton and Omnitracs expect to launch the system later this year, and roll it out broadly in 2018.

Initially the trucks will travel only in convoys of two. Peloton CEO Joshua Switkes said that’s in part because of concerns that platooning will make it difficult for other vehicles to merge onto highways.

By starting with two-truck platoons, the public will slowly be eased into experiencing a new and potentially confusing technology, he said. Down the road, Switkes doesn’t expect larger convoys of platooning trucks to be a problem for merging motorists. He said the trucks are programmed to broaden the gap between themselves if a driver cuts in between. But motorists will need the courage to slide their vehicle between two tractor-trailers that are less than 50 feet apart.

Transportation experts see truck platoons as a step toward fully autonomous vehicles. Companies are pouring billions into developing self-driving cars and trucks, but the technology won’t be ready for primetime for several years.

In the meantime, truck platoons are a way to partially automate trucks and enjoy cost savings. Platoons are also a potential solution to the trucking industry’s driver shortage: While initially these trucks will have a driver in the tractor-trailer following the lead vehicle, they may not be necessary forever.