The Age Of The Digital Car Key Is Finally Upon Us 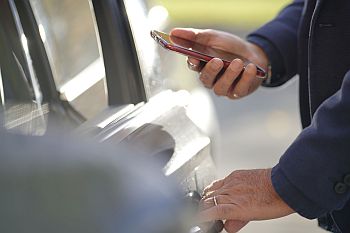 The idea of using your phone or smartwatch as a car key has been kicking around for a while, and some of the more expensive vehicles are already outfitted to let you do it. Up until recently, the necessary software wasn’t even prebuilt into devices, meaning you’d need a third-party app to lock and unlock your car.

That’s all changing though. At Apple’s World Wide Developers Conference last summer, it introduced a new Car Keys protocol that embedded the feature into iOS’ Wallet app, the same place your credit cards are stored. However, to date the company has partnered only with BMW to roll it out.

Samsung unveiled its new Galaxy S21 range of smartphones, and, like Apple, it’s also baking digital key hardware and software right into its phones. Unlike Apple, the Korean tech giant has announced collaborations with Ford, Genesis and Audi, as well as BMW, to bring the feature to more makes and models “in the near future.”