Tesla Is All the Rage. But Barely Anyone Is Actually Buying Electric Cars 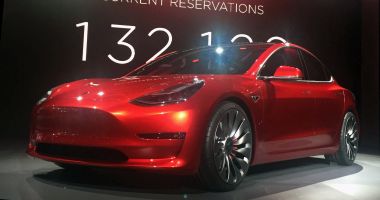 For all the excitement Tesla Inc. mustered by starting to deliver its cheaper Model 3, the tall order ahead for the sedan will be to pull off what no electric car has done to date — move the needle on the auto market.

Tesla’s sedan starting at $35,000 has landed as U.S. sales of EVs and other green autos, including hybrids, perk up for the first time in four years. The gains have been too modest to matter to an industry in decline during the first half of the year. Total car and truck deliveries probably shrank a seventh straight month in July.

A dearth of EVs offering both affordability and ample driving range has kept consumers from demanding them in large numbers thus far.

On paper, the Model 3 and General Motors Co.’s Chevrolet Bolt have the potential to take significant steps toward EVs finally reaching mainstream relevance. Both are priced closer to what the average vehicle sells for in the U.S. and are capable of going more than 200 miles between charges.

“If you’re trying to make a difference in the world, you obviously have to make cars that people can afford,” Elon Musk, Tesla’s chief executive officer, told reporters Friday before handing over the first 30 Model 3 sedans to company employees. “This is a car that about half of the people in the U.S. — in an advanced economy — can afford.”

To read more of the original article, go to Fortune.

Jul 31, 2017connieshedron
NAFA's Next Webinar: Electrifying Your Fleet How the Latest Technologies Can Significantly Reduce the Infrastructure and Operating Costs of Driving on Electricity - Register Now!‘Textalyzer’ May Bust Distracted Drivers — But at What Cost to Privacy?