A Safe, VERY Safe Ride in a Self-Driving Ford Fusion 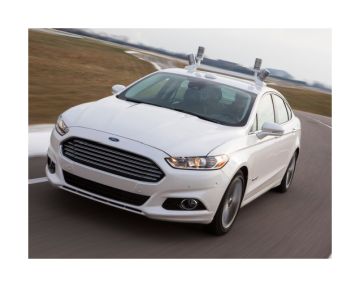 After a 10-minute ride in the back seat of a self-driving Ford Fusion hybrid on a loop around the company’s Dearborn research campus, I felt safer than if I had driven myself.

It reminded me a little of my first successful driver’s test at age 16. Stop a little longer. Wait until the pedestrian completely crosses the intersection. Remember, the instructor could take something valuable away.

This was the opposite of my ride with NASCAR legend Bill Elliott at Road Atlanta back in the 1990s.

“We follow the speed limit (in this case 25 miles per hour). We drive by the letter of the law,” said Schuyler Cohn, one of two Ford autonomous vehicle engineers who served as my fellow passengers. “We’re going to stop for pedestrians at crosswalks, maybe a little longer than most people would.”

Today, Ford has 10 of these vehicles and 20 more are in production, said Randy Visintainer, Ford director of autonomous vehicles. By 2018, Ford employees will be able to use them to get from one point to another within the area roughly bounded by Oakwood Boulevard, Rotunda Drive and Snow Avenue.

If you’re seeking a “Fast and Furious” experience, this technology isn’t for you.

But Ford has sufficiently refined its small fleet of self-driving Fusion hybrids to allow an international media group to test it on a specific route. The automaker has pledged to deliver a fully autonomous vehicle — no steering wheel, gas or brake pedal — to a ride-sharing service by 2021.

As Ford and other automakers admit, this technology is aimed at a very different pool of customers than those who have bought five generations of Mustangs or placed the earliest order for the GT ultra sports car.

“Why are we doing this? Consumer attitudes and their priorities regarding vehicles and transportation are changing, ” said Ford CEO Mark Fields. “The world has moved from owning vehicles to owning and sharing them. This is driving us to reconsider our entire business model.”

The self-driving Fusions still have steering wheels, gas and brake pedals. Ford engineer Jakob Hoellerbauer sat behind the wheel and could have taken control if needed.

Still it’s easy to spot them from the outside. They all carry a contraption that looks a little like a bike carrier on the roof. Within that device are mounted four rapidly rotating cylinders about the size of a 20-ounce aluminum soft drink can. Those are the lidar modules that emit light beams at a staggering speed to capture every detail of the environment within about 100 meters of the vehicle.

Read more of the original article at The Detroit Free Press.