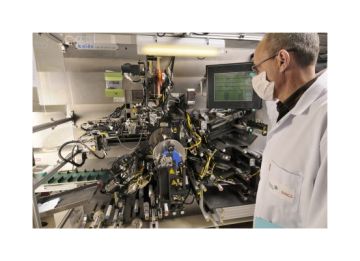 The plunging price of petroleum isn’t the only thing threatening to derail demand for battery-based vehicles. At a time when most commodity prices – everything from oil to gold to copper – have been on the decline, traders continue to bid up the fundamental component of today’s electric vehicles: the lithium used in the most advanced batteries.

The raw material, lithium carbonate, more than doubled in price towards the end of last year, and the trend has continued upward, pushing to as much as $23,000 a ton in recent weeks. And that’s even before the battery-car market builds any real momentum.

California-based Tesla Motors, for example, produced just 50,000 vehicles last year, but it hopes to start nudging towards 500,000 once its new Model 3 gets into production late in 2017. And as tough new global emissions and fuel economy mandates phase in, even mainstream manufacturers will be expanding their use of battery-based powertrains.

“In order to produce a half-million cars per year,” Tesla CEO Elon Musk said during the March 31 debut of the Model 3, “we would basically need to absorb the entire world’s lithium-ion production.”

The sharp rise in the price of lithium ore comes at a time when the auto industry – as well as the consumer electronics and stationary power businesses – on prices to fall and make battery-based technologies more affordable. At the beginning of the decade, the basic cells needed to store a kilowatt-hour of current cost almost $1,000. According to Mark Reuss, General Motors’ global product development director, that has fallen to $145 with the batteries that will be used by the maker’s 2017 Chevrolet Bolt battery-electric vehicle, or BEV.

Considering the Bolt will have 60 kWh of lithium-ion batteries, that works out to a price cut of about $50,000 a vehicle. Only by dropping the batteries to $9,000 per vehicle could GM financially justify the BEV’s price tag of around $30,000 after factoring in $7,500 in federal tax credits.

As with any manufactured product, raw material costs are only part of the final price tag. Mass production certainly will play a factor, something Tesla hopes to benefit from as it ramps up operations at the new Gigafactory it is erecting near Reno, Nevada. The facility will, when up to full speed, become the world’s largest lithium-ion battery plant.

But experts caution that in the already highly automated field, there won’t be the sort of benefits that came with, say, the launch of Henry Ford’s first moving automotive assembly line.

It doesn’t help that what has come to be known as “white petroleum” can be sourced from a handful of locations, Australia, China and Latin America’s Lithium Triangle, Argentina, Bolivia and Chile, notes trade publication OilPrice.com. Bolivia, with one of the world’s richest deposits, has sharply cut back on new mining due to protests by its indigenous population.