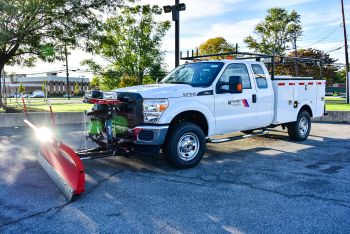 Like most public transportation agencies, NJ TRANSIT’s motto for its fleet of nearly 1,000 work vehicles needed to support its rail and bus operations was “purchase, power through, then purge.”

These vehicles, which range from sedans to high rail knuckle boom trucks, were driven for many years – often well past the optimum or even recommended replacement schedule – and then finally removed from service once they were found to be beyond repair. On average, a NJ TRANSIT light-duty truck remained in service for at least 11 years, accruing at least 120,000 miles, with many exceeding 150,000 miles. Often times, these trucks had to have rusty beds restored, and some had entire engines or transmissions replaced by onsite maintenance garages.

In 2014, the fleet reached a point with more than 100 vehicles – a tenth of its fleet – needing to be replaced, but the budget only allowed for 45 new vehicle purchases through its strict purchase-only model for acquisition.

Jeff McNulla, NJ TRANSIT’s manager of support services and fleet administration, together with the agency’s fleet management partner, ARI, realized there was a better strategy that would save the agency money in a time of decreased state funding.

In January 2015, NJ TRANSIT did something for the first time; the agency leased 101 vehicles to replace some of its oldest units still on the job. The financial benefit became especially clear when comparing the maintenance costs of FY2016 and FY2017. In FY2016, NJ TRANSIT spent approximately $5.85 million to maintain its fleet vehicles. That amount dropped to $5.27 million just a year later – a savings of approximately $580,000 or 10 percent.

“Many of our trucks were showing their age. Several needed engine replacements as well as new transmissions and several body parts had rusted, resulting in maintenance expenses that escalated into a substantial deficit,” McNulla said. “Our newer leased vehicles are not only less expensive to maintain, they are more fuel efficient.”

NJ TRANSIT adopted a hybrid purchase/lease model which created the extra capital it needed to fund more vehicles in a single year, while also purchasing specialty vehicles that were crucial to the fleet. With the savings the agency and ARI uncovered, along with the influx of some additional federal funding, McNulla expects to be able to replace another 259 vehicles, each with more than 100,000 miles, in the current fiscal year.

“This next wave of new vehicles will dramatically reduce our maintenance expenses even further,” McNulla said.

And since the agency was able to replace so many vehicles, ARI also helped NJ TRANSIT find a better way to sell off the older vehicles coming out of service. In the past, NJ TRANSIT relied solely on state auctions to dispose of these vehicles.

“There are multiple ways to sell vehicles, and in this case the state auction wasn’t the best way,” said ARI’s Director of North American Supply Chain and Vehicle Remarketing, Partha Ghosh. “With such a limited audience of potential buyers, they were only getting $3,000 per vehicle.”

By taking a fresh look at how NJ TRANSIT replaced and resold its non-revenue producing fleet of vehicles, ARI has helped the agency produce a significant savings to its bottom line, allowing it to be well on-track to update the fleet in its entirety.

Sep 17, 2017connieshedron
Why Did Ford Build a 'Fake Driverless Car' Using a Man Dressed as a Seat?Body Repair Shop Selection: Are You Setting Yourself Up for a Nightmare Repair?