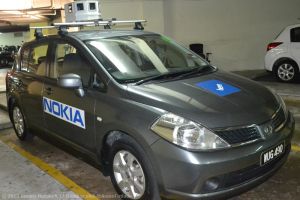 Here currently supplies the maps to Scania, Daimler Trucks and other commercial truck makers and is adapting its smart, or 3-D, maps for light vehicles.

“We’ve made these maps for years,” said Ogi Redzic, Here’s vice president of connected driving. “Now, cars can take much more data. You’ll see these maps [in light vehicles] in the next few years. This is imminent.”

Navigation maps for light vehicles already use 3-D illustrations to represent buildings and other landmarks. But Here’s next-generation 3-D maps are designed for vehicles’ predictive cruise control, a system that adjusts the engine and transmission for optimum fuel economy based on the road ahead.

With access to map data about the road’s grade and elevation — as well as stoplights, speed limits and other factors — the onboard computer could shift gears and speed to operate the car more efficiently and safely.

If smart maps catch on, the trend could cement Here’s status as the auto industry’s dominant navigation mapmaker.

Here estimates that it provides 85 percent of the maps used in vehicles worldwide. Like rival Google, the company sends fleets of vehicles equipped with lidar, or laser radar sensors, to record the twists and turns of every street in North America.

Now Here has developed the ability to calculate each road’s curvature and grade. “As lidar gets better, our maps get more granular,” Redzic said.