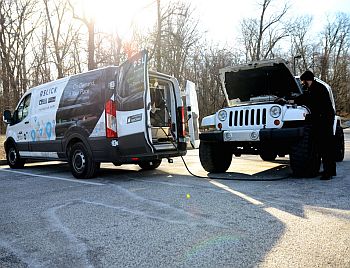 Fleet managers have been under constant pressure to find new ways to save money for decades. And let it be said, they’ve found many, from downsizing to outsourcing, from acquiring more fuel-efficient vehicles to, most recently, finding ways to prevent accidents.

Now, another new way has popped up: mobile fleet services that provide vehicle refueling and preventive maintenance. You might think the savings would be based on lower costs for fuel, parts or labor, but for the most part, you’d be wrong.

Instead, the major source of saving, according to a number of these providers, is time: the time it takes fleet drivers to go to and from a service station and wait for the job to be done. Time being money, this amounts to paying a driver for downtime, an expense compounded by the loss of revenue that driver might otherwise have brought in. These are costs that don’t appear on a fleet department’s books as “shop fees,” but are nevertheless real and affect the employer’s bottom line. Mobile fleet service providers want to help you save those hidden costs.

So, it is with one of the latest entrants into the mobile fleet services market, Slick. Headquartered in Baltimore, Slick was founded in May 2017 by Joe Manzari, a tech entrepreneur who successfully exited his last start-up, a national managed services provider for large retail chains, in 2016. He calls Slick “a technology company delivering a better way to service your vehicle, on demand and at your place,” and “a managed vehicle care platform [that] operates as a tech company with a strong emphasis on repeatable, scalable processes.”

That’s similar to the way the handful of venture capital-financed mobile fleet service companies that have mushroomed all around North America over the past three to five years could or do describe themselves. They’re all companies that use web- and mobile network-connected vans, pickup trucks and mini-tankers to bring the service station to the fleet vehicle.

Among them are companies like Booster, Filld, Driveroo, Your Mechanic, Fiix and Wrench, whose technicians tend to fleet and consumer vehicles while those drivers go about their business, or while the fleet vehicles are parked at a central location overnight. As Manzari explains it, Slick not only saves fleets money but makes it easier for fleet managers to track and coordinate their preventive maintenance program through Slick’s patent-pending, cloud-based and in-car management tools.

Manzari says Slick markets directly to fleets and jointly with fleet management companies. In less than two years, he said the company has landed contracts with some big fleets, like Amazon, Comcast and Enterprise, and has reached others through such giants of the fleet management industry as ARI, Element and LeasePlan.

When pitching Slick, Manzari says the key is to get the customer to look past a comparison of its service fees against those of brick-and-mortar providers. Slick’s are higher, but Manzari says a fleet customer’s total cost for the same service can be up to 50 percent less than “old-school” shops when the hidden costs of a driver’s downtime time, opportunity costs, lost up-sells, fleet manager time, and risk are factored in.

“Our value proposition really comes down to the customer’s awareness of the value of time,” Manzari explains. He says Slick gives its prospects access to an online calculator into which they can enter their driver’s hourly pay, the distance to a brick-and-mortar repair shop, cost of the service job, and the driver’s average wait time. “It routinely shows that even if they got their service done at the shop for free, Slick still saves them money.”

He offered an example from one doubting prospect Slick converted into a customer. “We have one very large corporate fleet that has a national contract with several of the national chains, where they’re paying around $30 per job for the preventive maintenance. And they were insistent that it was their only cost.

“Well, when they ran our model, it showed that the job was really costing them over $120 when you factored in all of the other real costs, beyond the shop charge. The rate we were proposing was around $70. So, according to them, before they did the analysis, we were going to charge them more than double, but when they looked at what they were really spending, our charge was about half of their true cost.”

As of today, Slick operates out of five cities – Boston, Baltimore, Detroit, Philadelphia and Washington, D.C. – from each of which Manzari says the company has a 50 to 80-mile service radius. Over the next 12 months, the company plans to expand to another 11 markets, including Atlanta, Chicago, Denver, Los Angeles, New York, Miami and San Francisco.

From here, the potential benefits of mobile fleet services look enormous. As with fleet accidents, where the total true cost far exceeds the cost of repairs, there are hidden costs incurred in the traditional ways of performing preventive maintenance that don’t appear as a consolidated line item in any department’s books.

As fleets face ever-rising costs, and those that do their own preventive maintenance are finding it harder and harder to find replacements for retiring technicians, are mobile fleet services the inevitable wave of the future? I’d love to hear what fleet managers think.

Feb 25, 2019Janice
Top Industry Leaders to Discuss Innovation and Disruption of the Commercial IndustryGolfing in the Bluegrass State!