Lyft Says, ‘Me Too!’ and Dives Into the Self-Driving Game 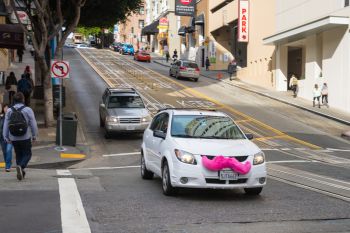 Conventional wisdom on self-driving used to go like this: A smart tech company, like Google’s Waymo, writes the self-driving software. A smart chip company, like Nvidia, provides the computing power. A smart automotive supplier, like Delphi, brings the car parts. A smart carmaker, like GM, furnishes the cars – and everything runs on the platform created by a smart ride-hailing company, like Uber or Lyft.

This line of thinking explains why players in this industry are partnering up like their survival depends on it. In the stage production that is getting you from A to B in a robocar, everyone plays a role.

But some of these companies want bigger parts than others. Today, Lyft announced it’s getting into the self-driving business, launching its own unit to build autonomous vehicle software and hardware. “It’s too strategic an area for us to not be a player,” says Luc Vincent, the ex-Google StreetView-er who will head up the initiative’s technical side.

Until today, Lyft’s strategy seemed to hinge on hopping between carmakers like General Motors and tech companies like Waymo, striking deals that would put autonomous vehicles on the Lyft platform. (The company did say it’ll maintain these partnerships, including one with self-driving car company Nutonomy that’s slated to bring self-driving taxis to Boston.) But Lyft’s strategic play to tackle autonomy on its own suggests that business models for this booming industry are far from settled.

To read more of the original article go to Wired.

Jul 24, 2017connieshedron
Element to Integrate Data Provided by OnStar into its Xcelerate Fleet Management PlatformDeer Caught in the Headlights? Your Car May Soon See Them