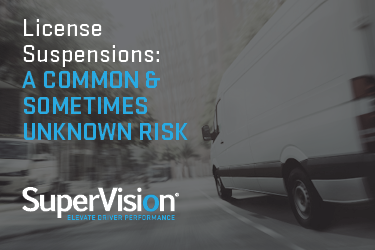 Driving-related grounds for suspension can vary by state, but generally, the following offenses will result in a driver’s license suspension:
• Reckless driving
• Careless driving
• Leaving the scene of an accident
• Accumulation of traffic tickets
• Assault of another motorist
• Multiple violations of DUI

These types of license suspensions are very serious and are often accompanied by additional fines, potential legal action and large risk to the company employing the driver. A manager should take immediate corrective action with the driver upon report of the suspension.

Driving-related suspensions are significant red flags that can indicate a risky driver; however, non-driving suspensions do not always imply higher driver risk. Should a fleet manager act on a driver with a non-driving license suspension?

An unlicensed driver that continues to operate puts an organization at risk for a Negligent Entrustment Lawsuit, regardless of the reason for suspension. Employers have a duty to know what is in their driver’s history prior to putting the driver on the road.

Continuous driver license monitoring gives employers and drivers updates on license status and will alert an employer if a license is suspended in real-time regardless of the type of suspension. Learn more about how license suspensions can put your organization at risk and how to avoid those risks in SuperVision’s latest white paper Risky Drivers: How to Spot the Red Flags.