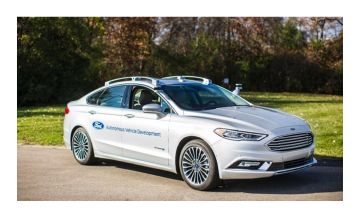 But Washington said Ford’s development team, which is working alongside start-up artificial intelligence company Argo AI, isn’t caught up in the race to be the first automaker.

“I think we are extremely well-positioned because we’ve got a technology company working with us that understands how to build the robot,” Washington recently told the Free Press. “And we’ve got an automotive manufacturer underneath us ….with more than 100 years of experience of systems integration.”

Ford is relying on Argo AI – a company co-founded last year by Google car project veteran Bryan Salesky and Uber engineer Peter Rander – to take the lead on the development of the brains of its self-driving car. Ford acquired a majority stake in Argo AI in February.

“We don’t worry too much about where the competitors are. What we are worried about is how do we bring this technology to market in a way that’s a fit (for customers). And that’s what we are focused on,” he said on the same day that Ford offered members of the media rides in the company’s self-driving Ford Fusion test car.

Washington has been a top executive at Ford since joining the automaker in 2014 who now is taking on even more responsibility under Ford CEO Jim Hackett. At Ford, Washington oversees the automaker’s advanced research and engineering efforts and gained the additional title of chief technology officer in May.

That essentially gives Washington oversight of all of Ford’s autonomous vehicle efforts as well as oversight of the development of a wide range of other new technology.

Before joining Ford, Washington was vice president of the Advanced Technology Center at Lockheed Martin and was one of the most prominent African-Americans in aerospace. Now he is one of  eight top executives at Ford who reports directly to Hackett.

Read more of the original article at Detroit Free Press.

Jul 3, 2017connieshedron
Volvo to Only Make Electric-Powered Cars From 2019Be A Part Of NAFA’s 2018 Institute & Expo: Call For Presentations Now Open