Is This, Finally, The Affordable Electric Car? 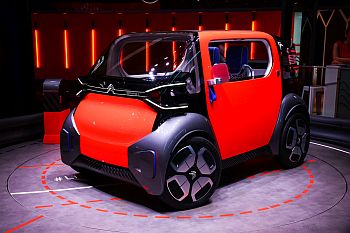 The electric car revolution won’t succeed until new battery-only vehicles are affordable to average income buyers and a sneak preview ahead of the cancelled Geneva Auto Show showed the industry was still nowhere near achieving this promised land.

It’s not that there aren’t plenty of small cars that look like they should be affordable. But the electric BMW Mini and even the Honda E are completely out of reach of the average buyer.

The European industry must be able to reach out to the mass market with mass market prices for electric cars. French carmaker Citroen unveiled the all-electric little Ami, an electric city car that costs about $6,400 after tax, can carry two people, travel at a top speed of about 30 mph and has range of 43 miles from its 5.5 kWh lithium-ion battery. The Ami was shown as a concept car at Geneva 2019, and looks as though it could well stand in as a golf cart at weekends.