Ford Takes the F-150 Lightning EV Pickup to the Limits 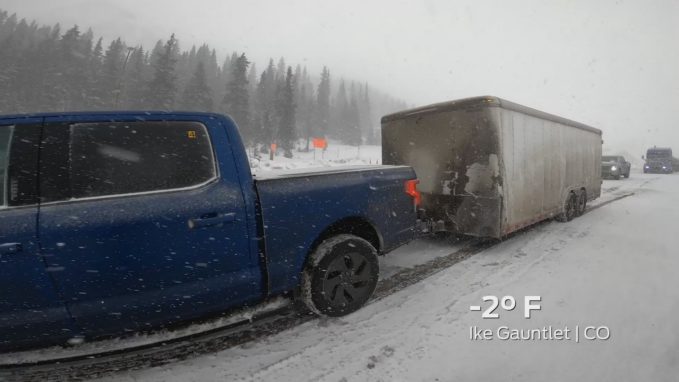 Ford has long been proud of the fact that it’s F-150 pickup truck has been the best-selling vehicle in its class for some time. Now, with the introduction of the all-electric F-150 Lightning pickup, Ford hopes to extend its dominance to include the new electric pickup truck category, as well.

To ensure that the Ford F-150 Lightning is ready to hit the road when deliveries begin shortly, Ford put its new model through some very grueling weather testing. To be sure, severe weather testing has been conducted by vehicle manufacturers in all segments for decades. In this case, however, Ford needed to push the limits of that testing since it hopes to jump ahead of the competition right out of the gate.

To facilitate this, Linda Zhang, Chief Engineer of the F-150 Lightning, and her team, took a fleet of their all-electric pickup trucks to Colorado, where the “Ike Gauntlet” awaited. This is a torturous 80-mile segment of I-70 that includes a 7% grade and rises to over 11,000 feet above sea level. Beginning in Boulder and ending in Frisco, this is largely regarded as the world’s most challenging towing test. To make it even more of a challenge, the F-150 Lightning wasn’t just towing the usual load. Attached to the truck was a trailer weighing in at 10,000 pounds and designed with a flat front to produce maximum wind resistance.

In an interview with the Detroit Free Press, Lightning vehicle engineering manager Dapo Adewusi, who has worked on Ford trucks for twenty years, said, “If you’ve ever driven a (gasoline) truck, towing, coming down a grade or up a grade, the engine is screaming at you. We have a tow/haul drive mode similar to (ICE) trucks. You hit the drive mode and the truck holds its speed coming down the grade. There’s nothing screaming at you. It gets to the point where you think the unit is slowing down coming down a steep grade. It’s so effective in maintaining your speed to ensure you are in control of the vehicle.”

Not only did the Ford F-150 Lightning have a steep grade to contend with. Temperatures were routinely below freezing, and snow accumulation was constant. But the cold weather challenge was just one half of the equation. Ford needed to prove that it’s all electric pickup truck could survive in an extremely hot environment, as well. So, the team headed to the Arizona/Nevada border, where the Lightning could tow the five-ton, flat-fronted trailer across the Davis Dam.

The dam is situated on State Route 68 between Las Vegas and the Hoover Dam. This stretch of highway is especially grueling since it includes a precipitous climb that begins at an elevation of 550 feet and ascends to 3500 feet for nearly 11 ½ miles. Not only did the Lightning pull its heavy load successfully for multiple circuits on this route at freeway speeds, but it did so in temperatures that reached 118˚ Fahrenheit.

Further, the terrain of the desert seems compatible with Ford’s engineering of the new electric pickup truck. In a Detroit Free Press article, Anthony Magagnoli, a human factors and lifestyle attributes engineer at Ford, said, “The Lightning really shines on a loose surface, where you can make use of the power and kick up a lot of dirt. It feels like a rally car.” Magagnoli, a former race car professional, has some expertise in this area.

So, once the Ford F-150 Lightning electric pickup truck completed its arduous tests in extreme hot and cold environments, was the boss happy? According to Chief Engineer Linda Zhang, “It was effortless. The vehicle performed flawlessly.”