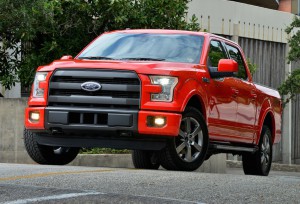 With newly released EPA test numbers in hand, Ford Motor Co. has declared its 2015 F-150 the nation’s most fuel-efficient gas-powered full-size pickup truck. Based on EPA numbers and what Ford billed as apples-to-apples comparisons, the new aluminum-bodies F-150 will get anywhere from 5% to 29% better mileage – in some cases as much as 7 mpg – over the prior model.

That’s “a significant achievement,” declared Ford’s global product development director Raj Nair, especially when taking into account the fact that the average new 2015 F-150 will also see an increase in both towing and cargo capacity.

Ford has been promising to deliver a big bump in mileage ever since revealing its plan to migrate from a conventional steel to aluminum-bodied truck. That move can save as much as 700 pounds per vehicle. The company sought to strike a balance that would boost capabilities – a big issue with buyers – as well as mileage.

Ford did not get to claim the most fuel-efficient full-size truck overall, however. That honor still belongs to the Ram 1500 EcoDiesel produced by rival Fiat Chrysler Automobiles, which gets up to a maximum 20 City, 28 Highway and 23 Combined in its base configuration. The new F-150 gets up to 19/26/22 with a 2.7-liter EcoBoost engine in a base 4×2 version of the truck.

Product chief Nair downplayed the Ram’s advantage by noting that diesel has been running an average 38 cents a gallon more than gasoline during the past year. At the same time, the EcoDiesel is a $4,770 option compared to $495 for the 2.7-liter turbocharged EcoBoost engine. That completely wipes out the fuel savings, Ford officials stressed during a Friday morning news conference in Dearborn, Michigan.

“For our customers, fuel efficiency is measured at the wallet,” argued Nair.

Even with the more expensive Ford EcoBoost 3.5-liter V-6, he added, it would take about 15 years, at the current diesel-gasoline price gap to achieve “payback” for the Ram EcoDiesel.

The gains made by the 2015 Ford F-150 depend upon model, and it can be a challenge to come up with precise numbers because it requires factoring in significant changes in the new model’s engine line-up. The new 2.7-liter EcoBoost V-6 gets as much as 19 City, 26 Highway and 22 Combined – a 29% increase if compared to Ford’s old, naturally aspirated V-8.

READ MORE of the original story on The Detroit Bureau