Flying Taxis Will Be More Like Taking the Bus 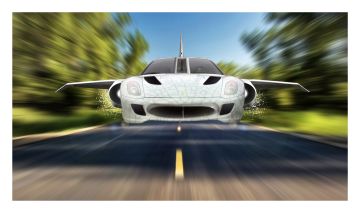 The idea is certainly audacious: Thwart traffic in congested cities by flying over it. Quick, quiet, clean, cheap.

This concept—which requires a new type of battery-powered vertical takeoff and landing vehicle (VTOL)—is Silicon Valley to its core in terms of self-liberation and greater efficiency.

These electric vehicles would operate from “vertiports” situated around urban areas, predominantly atop buildings. And, at some point in the future, they would be unmanned.

“In the nerd hierarchy of needs, the flying car is up there with downloadable brains and a working holodeck,” Bloomberg Businessweek noted last year in a profile of Google co-founder Larry Page’s aviation ambitions and the seemingly never-ending quest for personal flight. Well, those nerds are still at it.

“If you’re not planting the seeds for five, 10 years out, you have no company in five to 10 years,” Jeff Holden, Uber’s chief product officer, said.

Plenty of startups want to hasten the day when we all have a flying car, but Uber and its partners see an air taxi as the logical first step. The company released a white paper in October to discuss its views of on-demand urban air transportation.

Yet even with a limited foray into the world of George Jetson and Blade Runner, it’s hard to overstate how many fundamental achievements must occur first, on both regulatory and technical grounds, before anyone can summon a cab from above.

No one has built a craft of the sort Uber envisions, much less one that flies three or four people quietly on batteries powering multiple propulsive rotors. Battery technology has years of advances to go in order to become smaller and lighter, two attributes critical for an efficient VTOL.

Even the simple matter of naming these things isn’t that simple after all. A flying car? Nope, the future multi-rotor craft will not even be close to an automobile. Nor is it a smaller, more technologically-advanced helicopter. And whatever the consensus on nomenclature, given the expense—Uber suggests a long-term cost around $200,000—it’s unlikely large numbers of motorists will be trading in their ground cars for flying transport. In fact, at first these vehicles may be too exotic even for sky tripping taxi fleets. Given the intense focus on offering air travel at the lowest possible cost, to make it a service for the masses, an air shuttle seems more apt for cheaper fares.

And any new aircraft design will in turn require new standards, new regulations, new government certifications of those standards, as well as software testing since programs will be needed to help fly the aircraft.

May 1, 2017connieshedron
Winners of the 2017 Fleet Excellence Awards!Panel: Autonomous Cars Will Change Insurance Sooner, Not Later