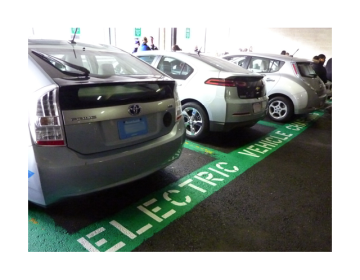 As all fleet managers know, vehicle depreciation is their single biggest cost.  So, it came as startling news recently when the British auto data research company Cap HPI reported that the resale prices of electric vehicles (EVs) in the United Kingdom have started to rise.

Specifically, the company said that some EV models have a resale value that is higher than their purchase price after one year and 10,000 miles on the road.  For example, the company found that over the prior 12 months:

Now, it must be noted that the U.K. auto market is quite a bit different from that in the U.S. For one thing, the U.K. government has announced it will ban the sale of diesel and gasoline-powered vehicles in 2040, and that at least one city – Oxford – will ban them from driving through the city by 2020, just two years from now. Another is that gas and diesel fuel is much more expensive there than here.  Finally, diesel vehicles are much more popular in the U.K., where until recently they made up close to 50% of all new-car sales, providing a much larger source of demand for EVs.

But if the trend holds in the U.K., appears in other European countries where EVs have grown market share significantly, and the trend spreads, it has major implications for fleet vehicle selection because of its impact on vehicle total cost of ownership and lifecycle cost analysis.

Now, it may be too much to expect a U.S. fleet to recoup more than in spends to acquire an electric vehicle, especially since the typical fleet holding period is three to four years.  At historic acquisition and resale values, the break-even period for a hybrid vehicle, for example, is more than five years.

But, according to Tim Fleming, an analyst at Kelley Blue Book I spoke with this week, used EV values appear to be improving.  Fleming said his organization has been tracking the average wholesale auction price of one to three year old EV models against the manufacturers’ suggested retail price (MSRP), and that he’s seen an increase in the average resale price recently.

The reality, however, may be even better than Kelley Blue Book is indicating. The reason is that its calculations don’t include the $7,500 federal tax credit that buyers may qualify for, nor state rebates (it’s $2,500 in California), and any leasing company discounts.  By the way, the federal tax credit, which some observers believed would be eliminated in the new tax law enacted last month, has been retained.

We already know that the higher costs of EVs and hybrids are more than conventionally powered autos are offset, to an extent, by the lower cost electricity and maintenance.  Still, the return on investment has been not been good enough for most for-profit fleet operators to make them a fleet staple.

But, as with the technology itself, things are changing rapidly.  Battery prices have fallen significantly over the past few years and are expected to continue to fall at least for the next few years, and electric vehicles ranges are increasing.

Fleet managers can no longer take for granted that EVs and hybrids no longer make economic sense. To be sure they make the right decision on their next round of vehicle acquisitions, they need to be completely up to date on projected resale values, country by country over the next few years.