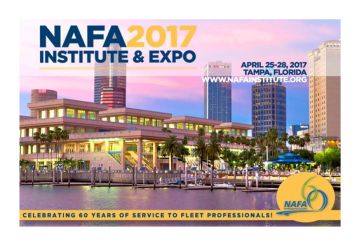 After weeks of intense judging by industry leaders, the finalists for NAFA’s 2017 Fleet Excellence Awards have been chosen.

The Fleet Excellence Awards (or FLEXY for short) are designed to shine a spotlight on those who have impacted fleet management in both the corporate and public fleet segments during the previous year. Three finalists were chosen for each of the seven categories.

Winners will be announced during the Fifth Annual Fleet Excellence Awards Celebration on Tuesday, April 25 at the Tampa Convention Center, Tampa, Florida during NAFA’s annual conference.

NAFA’s 2017 Institute & Expo, which takes place April 25-28 at the Tampa Convention Center, Tampa, Florida, is the industry’s largest gathering of fleet managers. The perfect opportunity for fleet professionals to increase their networking power, I&E is the largest community of fleet professionals who attend year after year because they experience I&E’s hands-on value. Attendees network with thousands of fleet professionals, experience the latest services and products on the I&E Expo floor, receive cutting-edge training and education, and gain expertise that can improve their employer’s bottom line.