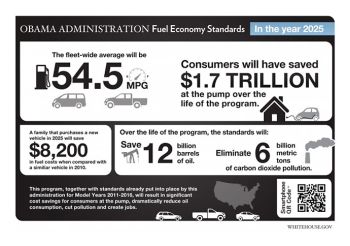 With a presidential mandate aimed at government regulations, the new director of the Environmental Protection Agency is widely expected to roll back rules set during the Obama Administration that would boost automotive fuel economy standards to 54.5 miles per gallon by 2025.

Such a move would come in response to a written request by a consortium of automakers sent to the new White House last month. It warned that the Corporate Average Fuel Economy, or CAFE, standard, as now written, would “depress an industry that can ill-afford spiraling regulatory costs.”

Proponents of the current fuel economy rules – which were crafted as part of a compromise between the Obama Administration and the auto industry – insist the costs cited by the industry are overblown, and that consumers want higher mileage and are willing to pay for it.

Ironically, several automakers have told TheDetroitBureau.com that even if the EPA does roll back CAFE, that would likely have little impact on their future product plans, in part because they would still need to meet tough emissions and mileages standards set in Europe, China, Japan and other parts of the world.

The rules, as first established by the industry-government compromise, required a so-called mid-term review that would look at factors including public demand, the availability of technology for meeting the mileage target, and the cost of achieving that goal. The EPA issued a decision just one week before the new Trump Administration took office, declaring the industry could achieve the mandate cost-effectively.

But automakers quickly geared up to get the Trump White House to open the review process back up. Automakers have opposed CAFE since it was first created four decades ago and blocked any significant increases for years, before giving in after Barack Obama was elected. At the time, fuel prices were spiking as high as $4 a gallon and many believed that consumers would downsize to get better mileage, making CAFE easier to reach.

The opposite happened. As fuel prices fell, sales of SUVs, pickups and other light trucks took off. During the last year, with trucks now accounting for almost two-thirds of U.S. new vehicle sales, improvements in mileage have largely come to a halt, according to monthly data gathered by the University of Michigan Transportation Research Institute.

“I think every (automaker) that produces SUVs and pickups will benefit from (a) rollback,” said Sergio Marchionne, CEO of Fiat Chrysler Automobiles, during a media roundtable at the Geneva Motor Show on Tuesday.

Industry opponents counter that the CAFE rules allow for lower mileage numbers with larger vehicles, such as FCA’s Jeep Grand Cherokee SUV and Ram 1500 pickup. They also note that with various credits and adjustments, the actual mandate would mean a real-world target somewhere in the low-40 mpg range, rather than the official 54.5 figure.