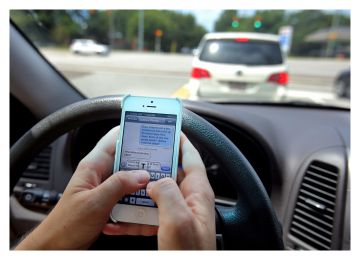 New data collected from thousands of drivers suggest that more than half of all trips that ended in a crash also included some form of distraction from a mobile phone.

The data also found that in nearly a quarter of crashes, the driver was using a phone within a minute before the crash occurred, and perhaps even at the moment of the crash.

The data – collected by Cambridge Mobile Telematics from hundreds of thousands of drivers using its app  – appear to strengthen the view that smartphones have made the nation’s highways more dangerous.

The data also suggest that none of the laws that have been enacted so far have made a dent in the problem.

And yet the company, not unlike others that promote the use of driving apps, suggests that the technology that got us into this mess could get us out of it. I wish I could believe that.

The report comes as safety advocates raise alarms about increased traffic fatalities, but debate the factors behind the increase. The National Highway Traffic Safety Administration (NHTSA) and the Insurance Institute for Highway Safety say the recent increase in fatalities follows a predictable cycle: they attribute much of the increase to cheap fuel and a bustling economy nearly 10 years after the Great Recession contributed to a decline in traffic fatalities.

Others – including officials at the National Safety Council – have questioned whether the growing death toll can be explained sufficiently by a strong economy only. Yet they too acknowledge that the hard evidence linking smartphones to traffic fatalities is lacking.

Meanwhile, every other week seems to bring news of a deadly crash likely caused by a distracted driver and a smartphone. The latest involves the March 29 crash between a pickup and a small church bus that killed 13 people on a rural road about 75 miles from San Antonio.

A witness told the Associated Press that he was following the pickup before the crash and that the vehicle appeared to be traveling so erratically that the witness alerted authorities. After the crash, the 20-year-old driver – identified as Jack D. Young – told witness Jody Kuchler that he had been texting, the AP reports.

Apr 5, 2017connieshedron
A Fuel Card, and a PartnershipFind the Work Trucks You Need, More Quickly and Efficiently