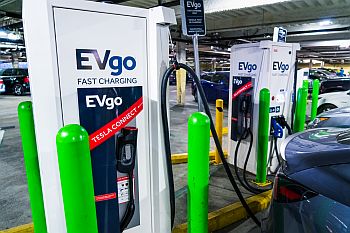 Public fast-charging network EVgo has announced a new program called EVgo Reservations that gives drivers the freedom to claim their spot at a charger ahead of time. The initial rollout consists of 17 locations across California and the Seattle area in a pilot program that has already expanded.

The company’s software team developed this new feature by integrating various makes and models of EV fast chargers with its own back-end software system. As a result, drivers can now make a reservation at a charger of their choice while en route, or up to two weeks in advance.

Allowing for reservations could help those running errands to plan their route based around an available charger at whatever store they’re looking to visit. This could prove super effective for travelers as they can reserve their spot from the road or even weeks before they depart to ensure they can charge quickly to get back on their journey.

The Screen in Your Car Is Beckoning
Years of Work by IIHS-HLDI Paved Way for Safety Provisions in Infrastructure Bill
This Electric Car Battery Recharges in 10 Minutes – So Why Isn’t it in Today’s EVs?
ARI Introduces Series of Enhancements for its Award-Winning Fleet Management Platform and Complementary Mobile App
New Technology Makes Windshield Repair Harder Than Ever
Waymo is 99% of the Way to Self-Driving Cars. The Last 1% is the Hardest
GM Teases Two New Zero-Emission Commercial Vehicles, a Truck and a Van