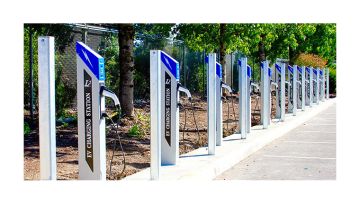 Electrify America is announcing what it calls its “Boost Plan,” which consists of a doubling of its charger deployment plan. While Electrify America was started through the EPA and CARB forcing Volkswagen to spend $2 billion on EV charging infrastructure in the US, the result is that Volkswagen now has the top fast-charging network open to all electric vehicles in the US.

Electrify America is the largest, open DC (Direct Current) Fast Charging network in the U.S. This new commitment builds on the company’s plans to have about 800 charging stations and approximately 3,500 individual chargers in the U.S. by the end of 2021 and will increase the total number of charging stations to more than 1,700 and 9,500 individual chargers by the end of 2025. The company has installed on average four stations per week since its first charging station opened a little over three years ago in May 2018.

As part of the expansion, Electrify America will not only multiply its presence in established U.S. regions, but also add the states of Hawaii, North Dakota, South Dakota, West Virginia, Wyoming and Vermont, bringing Electrify America’s network to 49 U.S. states and the District of Columbia.