Booster Wants to Bring the Service Station to Your Fleet Parking Lot! 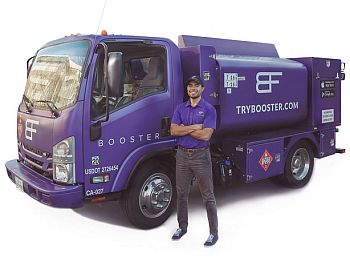 There seems to be no end to the electrical, electronic, digital gizmos and applications that promise, and mostly do, make our lives better, make us more productive, save money or all three at the same time.

But every once in a while, there comes to the fleet world a novel solution that doesn’t involve the highest of high-tech wizardry, that is elegantly simple — a better mousetrap, if you will, that is both beautifully effective and powerfully cost-efficient. Take Pulse, for example, the company I wrote about last year that slashes the incidence of the most vexing kind of roadway collision – being hit from behind – by adding a switch to vehicles that makes the third brake light strobe.

And now let me introduce you to Booster. It’s a four-year-old company based in Burlingame, California, that can save a fleet tens of thousands, maybe hundreds of thousands of dollars a year by eliminating their drivers’ trips to the gas station. Instead, Booster will dispatch gasoline tanker trucks to any location to top off fleet vehicles’ gas tanks while they sit in a parking lot or depot or in the field.

In addition to pumping gas, Booster’s trained drivers can also make sure your tires are filled to the proper air pressure, and soon are expected to perform on-site oil changes, wash your car and even detail it, inside and out.

I spoke with Tyler Raugh, Booster cofounder and president of fleet, at NAFA’S 2018 Institute and Expo in Anaheim, California last month.

“We eliminate the need for fleets to go to a gas station or fuel island,” he said. “We save money for fleets in four ways: recovering lost time drivers spend at the gas station, eliminating the fuel it takes for drivers to go off route to a gas station, ending unnecessary wear and tear for gas station trips, and preventing fuel theft.” He added another benefit, “Less driving can mean fewer accidents.”

But what about the price per gallon Booster customers pay? Surely, to be profitable, Booster has to charge more per gallon than at the pump. “No,” he said. “Our price is the same.” And how does Booster make that happen. “We buy from fuel wholesalers, at wholesale prices,” Raugh explained.

So, what kind of fleet savings does Booster generate? Raugh was carrying a file folder full of case studies, and gave me two. Booster services some 100 vehicles for a Silicon Valley giant, which before Booster, the company spent $94,202 a year to refuel, – including driver time of 3,985 hours. In addition, in the prior year, those vehicles racked up two accidents at gas stations, and the company discovered a number of cases where drivers charged the company for gas for their personal vehicles. After Booster, the company’s fuel expenses were reduced by 57 percent to $40,950, there was no fuel theft and no accidents.

The second example was of a landscaping company with 60 trucks. Over a year, Booster cut fuel expenses by 80 percent – from $104,657 to $21,320 – and related driver time from 4,680 hours a year to zero. In addition, the fleet, which experienced fraudulent purchases totaling $18,000 the prior year, experienced none with Booster on the job.

Currently, Booster runs its purple delivery trucks in just three metropolitan areas: San Francisco, San Diego and Dallas. But Raugh says his outfit will enter three more major markets this year, and plans to be in as many as 15, coast-to-coast, by the end of next year.

Booster has some 400 customers, with some pretty impressive names. They include Amazon,
Facebook, Oracle, Cisco, PayPal, PepsiCo, Toyota, Nissan and Prudential Real Estate. The number of fleet vehicles it services at any single location, according to Raugh, ranges from five to 250. But what if a fleet has more than that? “We’ll send more trucks,” he said.

Booster already has a couple of smaller and younger competitors – Filld and Yoshi. Raugh believes, however, that Booster enjoys some technological and operational advantages he was tight-lipped about, which make him a unique player.

It was a surprise to me, however, that something as elementary as an alternative to trips to the gas station could have such a dramatic impact on fleet expenses. My chat with Tyler Raugh was a “duh” moment for me, because I never considered the hidden costs of refueling. How about you?