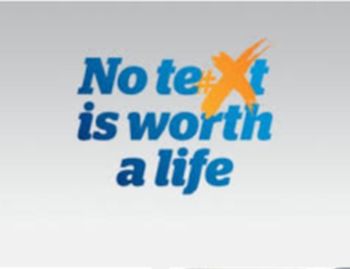 While everyone knows they shouldn’t use a smartphone behind the wheel, one in every four crashes still involves someone texting, snapping, sharing, or chatting on a mobile device. So how do we save ourselves … from ourselves? I’ve tested more than a dozen apps and gadgets that promise a fix.

Every major cellular provider offers something to help with distracted driving. I found AT&T’s free DriveMode app for Android and iPhone works the best, and after nearly six months of testing, is the only one that I still use every single day.

It turns on automatically when your car starts moving more than 15 miles per hour and silences text alerts. It doesn’t totally lock your phone down, though: anyone who texts will get a pre-configured response (like “I’m driving, will call you back in a minute”) and you can still access music, navigation, and select contacts on your phone with a single click. Parents can also set up the app notify them when a teen driver disables it.

The reason this app blew past the competition for me is because it’s super simple to use and eliminates the most common sources of distraction: phone calls, text messages, games and social media. You just set it and forget it. At the same time, it allows some interaction with the things I rely on, such as the Waze navigation app and streaming music via Spotify. Many safety experts argue that the only safe place for a smartphone in a car is in the trunk—but human behavior has already shown us that doesn’t work. (I’m not sure I could get anywhere anymore without Waze.)

AT&T DriveMode app works with other carriers, but the other providers have their own solutions too. Sprint’s Drive First app is great, but only available for Android phones. Same with T-Mobile’s DriveSmart app and you’ll have to pay $4.99 to get it to do what AT&T’s DriveMode does automatically. Verizon’s Driving Mode controls come straight from its Android Verizon Messages app, so it doesn’t work on iPhones either. It also disables texts and sends an auto-reply whenever you get a message, but it doesn’t turn off any other distractions. It also needs to be turned on manually every time you get in the car, unless you’ve paired it with Bluetooth.

Other Apps Worth Taking For A Spin

SafeDrive (free for Android and iPhone) makes a game out of staying off of your phone and I really like it. Instead of preventing you from looking at your phone, it awards you when you don’t. Whenever you’re in a car, a screen pops up on your phone that shows how many points you’ve earned. Leave your phone alone, and you earn points as you drive—but if you touch your phone, all of those points vanish. You can cash in your at your local gas station, and the list of other retailers is growing. Other SafeDrive users can even challenge you to see who racks up the most miles without using their phones. Winners get glory, and more points.

Focus — Screen Free Driving (iPhone) is another fun take on staying off your phone—kind of like smartphone shaming—but in an effective way. It launches when you start driving, and if you touch your phone, a voice sternly says, “hang up and drive.” If you don’t, the app gets downright angry, yelling phrases like, “lock your phone NOW,” “eyes on the road, Chief,” and even, “would your parents be happy with you if they knew you were doing this?”

It’s funny, impossible to ignore, and helps you realize how much time you really do spend sucked in by your smartphone. At the end of every drive, it gives you a road report showing how many minutes you’ve been distracted with your devices. That’s pretty eye-opening too. It’s free to download, but you can unlock extra features for $4.99, including how speeding reports for teen drivers.

If you absolutely need to stay plugged-in while on the road, try Android app MessageLOUD ($15.99/year). It’s a new service that automatically reads your texts and emails out loud as you drive. It works with Gmail, MS Exchange, Yahoo, Outlook, Office365 and Hotmail. It lets you delete, dismiss, auto-reply, or call back with a single tap or swipe—a lot like controlling your radio—without taking your eyes off the road. It’s still a fairly new app and more distracting than DriveMode, but a step up from having your phone in your hand and your eyes on the screen. The app makers are working on an iOS version now.

In theory, Siri should read my messages too, but I think I’ve dropped my iPhone too much and scrambled her brain. Everytime I ask, “read my texts,” she tries to Facetime someone named Dex.

This is an especially dangerous time for teen drivers. An annual AAA Foundation for Traffic Safety study shows the highest number of teen deaths on the road occur during the year’s “100 Deadliest Days” between Memorial Day and Labor Day. When it comes to tech support, there are lots of options here, but my favorite is tXt Blocker ($7/month). It shuts down the phone completely when your teen is driving (and lets you set up “No-Cell Zones” to prevent texting from work or school) that teens can’t hack around. You can also track and find your teen through the tXtBlocker website and see reports on how safely they’re driving.

May 31, 2016Janice
Michigan Bills Expand Use of Driverless Cars Beyond TestingA Steely Focus on CX