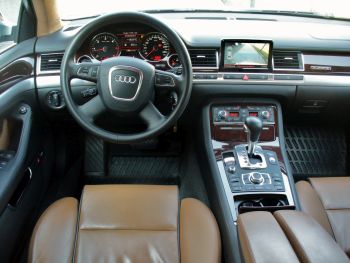 The concept of built-in obsolescence should be familiar to anyone that has ever bought a piece of advanced consumer electronics.

Back in the early 2000s, a brand new gaming PC would be out of date faster than its owner could notify all his or her friends of the acquisition. Over the past decade, smartphones have taken over as the devices that keep tempting us to buy new hardware with ever-escalating specs and capabilities.

And as we look forward to the next few years, it looks like self-driving car technology will be one of the fastest-moving areas of innovation.

Only one problem with that: people don’t buy cars anywhere near as often as the oncoming cascade of upgrades will arrive, and if each of those requires us to buy a new car, there’ll be a great deal of discontent.

Audi launched its new flagship sedan last week, the A8, which might be the smartest car ever put on sale. It can park and unpark itself without a driver inside, and it can be completely autonomous when driven on a highway at moderate speed and with plenty of other cars around to help it orient itself. I was at Audi’s launch event and asked the carmaker’s executives what happens when the company moves on to more sophisticated forms of autonomous driving.

The new A8 is rated for Level 3 autonomy, but what should an A8 owner expect when Audi reaches Level 4 and, the ultimate, Level 5? Would they be able to retrofit the new tech into their car? Nope. Alejandro Vukotich, head of Audi’s autonomous driving initiatives, told me that the A8’s smart systems will get software updates, but no hardware upgrades will be made available. Peter Mertens, Audi’s chief of technical development, stood by Vukotich and also seemed unperturbed by this future scenario.

Read more of the original article at The Verge.

Jul 26, 2017connieshedron
All Above Average Drivers: Raise Your Hand. Really?Britain to Ban Sale of All Diesel and Petrol Cars and Vans from 2040