For The Automakers, Large-Scale 3D Printing Is The Next Powerful Toolbox 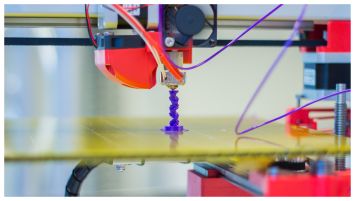 “Time is money” is an overused cliché.

Yet, in today’s hypercompetitive technology marketplace, it’s never been truer.

The most sophisticated CAD (Computer Aided Design), fluidynamics and crash simulation programs used by auto manufacturers cannot replace actual testing and the various stage gates in the large-scale manufacturing process, but that will soon change.

(Also known as “additive manufacturing,” 3D printing produces three-dimensional solid objects directly from digital designs through an additive process, either melting or softening material to produce multiple layers, or through stereolithography which cures a reactive resin with a UV laser or another similar power source.)

It’s a Jetsonian notion, 3D printing. Right out of Spacely Sprockets. You imagine a part or a widget, punch in some numbers on the Widgetmaker and – presto – out comes a fully functioning thing. We’ve arrived at that stage where companies can produce widgets in very short order, make changes to those parts and put them into assembly.

In the short- and medium-term, 3D printing will allow much faster time to market with minor variations added to higher volume cars. In the long term, it will not just yield individual parts, but complex combinations of parts from printing stations working in succession, effectively daisy-chained together, and using multiple materials. This level of complexity and depth will be tempered by many factors, not least of which will be the final cost of the product. For example, a $300,000 McLaren exotic sports car will be far more likely to contain a much higher level of 3D printed components than a $30,000 Ford (NYSE:F) Fusion, considering both the comparative costs and the vastly higher customization expected of an exotic car versus a family car.

Like all new technologies, materials and manufacturing processes, the leading edge becomes ever more democratized over time and Ford is now advancing a new partnership with Stsratasys (NASDAQ:SSYS) to print one-piece parts for prototyping and production. It will be some time before high-volume production parts are made from any 3D printing exercise, but Global Industry Analysts, Inc. predicts the total 3D printing market market will reach nearly $10 billion by 2020.

Yet, 3D printing is not entirely new. Aerospace, the military, the tech business, medical device companies and motorsports have been employing it for small parts and prototyping for roughly 15 years. In fact, Ford and Ganassi Racing’s winning prototype at the 24 Hours of Daytona back in 2015 used an intake manifold created using 3D printing as a last-minute iteration for that car’s EcoBoost V6 engine.

Read more of the original article at Forbes.

Mar 11, 2017connieshedron
How to Cut Down on Fuel UsageSelf-Driving Cars will Look Different: for one, no Man-Eating Grilles