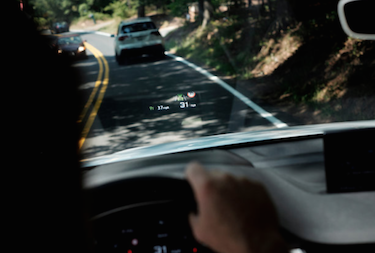 When Manish Undavia took delivery of the 2016 Audi A7 sedan — list price, about $71,000 — it came with technology rarely found in automobiles, even five years ago: collision avoidance systems, sensors to keep the car from drifting and, perhaps most baffling to Mr. Undavia, a head-up display.

“A what?” he asked the salesman.

Richard Cardenas, a salesman at Biener Audi on Long Island, turned on the car and showed Mr. Undavia how it worked. From the driver’s seat, the car’s speed — “0 mpg” — appeared about six feet beyond the dashboard, floating in space, visible only to Mr. Undavia.

It’s the latest application of a technology that has been long established in other industries. Airplane pilots, for example, use it to land. Video gamers swear by it to target aliens.

Now, the head-up display, once mostly confined to performance cars like the Chevrolet Corvette, is migrating more broadly to the automobile world, mainly in premium-priced vehicles, and finding a consumer audience that is only vaguely aware that such a feature exists.

To automakers, the technology makes for safer driving because the driver does not need to look down for information. The illuminated graphics, which may be white or colored, are transparent, so that the driver actually looks through them onto the road ahead.

But to skeptics, head-up displays are yet another informational distraction for the already data-overloaded driver. No federal standards govern the use of head-up displays, and that concerns some safety advocates.

“It’s like the Wild West out there in terms of what’s being put into cars, and we’re expressing caution because there are no standards,” said Deborah Hersman, president of the independent National Safety Council near Chicago and a former chairwoman of the National Transportation Safety Board.

“If a head-up display can warn of a collision or a grade crossing ahead and a train coming, that may actually help,” she said. “But if it puts up an iPod playlist or sends a restaurant reservation, that may distract from the task of driving.”

While the National Highway Traffic Safety Administration routinely issues voluntary guidelines to automakers over driver distraction, there is no federal regulation governing head-up displays. The agency said it had begun to research the issue and expected to issue guidelines.

At the nonprofit Insurance Institute for Highway Safety, a spokesman, Russ Rader, acknowledged that the systems could offer useful information, but said that they had the potential to be a distraction as well.

READ MORE of the original article in The New York Times

Sep 11, 2015admin
“Tell Me What I Need to Know…”Fleet Industry Expected to Grow