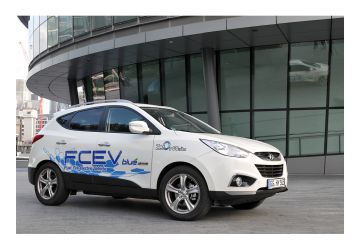 Arval has become a leading partner in one of the UK’s largest hydrogen fleet car trials to date, enabling it to gain operational insight into the running of hydrogen fuel cell cars by fleets.

The leasing and fleet management specialist is taking part in the Hydrogen Hub initiative, which will see fuel cell technology tested in a wide range of domestic, commercial and transport applications in Swindon, where Arval’s UK head office is based.

Initially, two vehicles will be leased to local companies by Arval, subsidised by the Government’s Office for Low Emission Vehicles. These are a Hyundai ix35h for the National Trust and a Toyota Mirai for Nationwide Building Society.

Arval will also take delivery of a Mirai to operate as part of its own company fleet. Other vehicles will also be delivered to local companies as part of a linked bid structure to which Arval will provide management support.

Paul Marchment, SME development manager at Arval UK, commented: “The first cars should be with their users by the end of this year and have been subsidised to a level that makes them cost comparable with a normal company model. As part of this arrangement, they will cover a minimum annual mileage of 10-15,000 miles over their three-year lease, and we will gather as much data as possible through our in-vehicle telematics service which will in turn help us to advise our customers in the future.”

The Hydrogen Hub initiative aims to have a total of 11 company-run fuel cell cars operational in Swindon by the end of this year and 50 by the end of 2017.

The trials will be supported by the existing public hydrogen fuelling centre in Swindon – plans are in place to open another early in 2017 – while local Hyundai and Toyota dealers will be able to offer the capability of servicing hydrogen cars.

Marchment added: “Having dealers familiar with fuel cell cars operating close at hand will mean that we are able to gain an intimate and detailed picture of how these vehicles are standing up to real-world driving conditions.”

Arval added that it plans to share a large part of its findings with customers and the wider industry.

Oct 23, 2016connieshedron
Reduce Your Downtime and Increase Your Revenue with ARI VehicleDowntimeView®Evaluate Your Best Ideas