A Report from the Wheels Results+ Fleet Summit 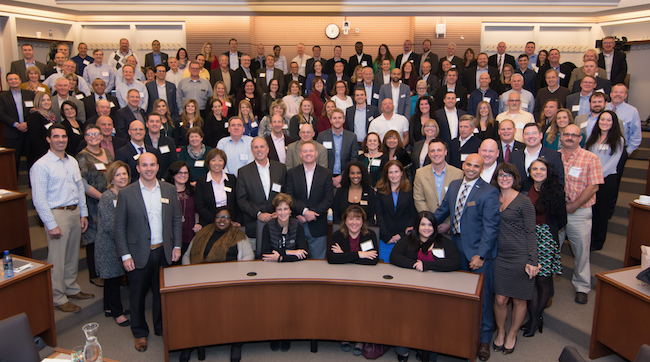 I was fortunate enough to attend the Wheels Results+ Fleet Summit in Chicago a couple of weeks ago, which was fantastic from both a learning and a networking perspective. Held at the lovely Gleacher Center (part of the University of Chicago) just off the Magnificent Mile, and structured as an open forum, this event highlighted notable recent successes in Wheels’ five Results+ optimal fleet categories.

The first Wheels client to present was Brian Fisher from Mortensen, a Minneapolis-based construction company. Fisher was the winner in the Fleet Administration & Ease category, and gave his presentation with Leann Rutz, his Account Manager at Wheels. The story was that Fisher had been new to Mortensen, and his primary goal was better administration of their fleet via an outsourced approach. Towards the beginning of the process, Wheels presented Brian with a spectrum of cost / benefit scenarios, and he chose to flip the entire fleet of 1,600 vehicles in the space of just one year (which, fortunately, actually happened quite smoothly). At the same time, Mortensen’s managers handed off some 13,000 fleet tasks to Wheels, allowing them to reclaim valuable hours that they could use far more productively on their core business.

Of course, this was just one of five engaging and informative presentations throughout the day. The other four were:

At the end of the forum, Wheels CEO Dan Frank gave a great rundown of the current state of the fleet industry, part of which was his assessment of 7 Common Truths About Autonomous Vehicles (that are really lies). Fleet Management Weekly aims to cover these 7 Common Truths in their entirety in an upcoming issue, but here are the first two as a teaser:

All in all, it was a great day of learning, followed by a lovely dinner with Wheels folks and their clients. We always like to point out that there are a lot of fantastic people in the fleet industry, and my day at the Wheels Results+ Fleet Summit was simply more proof of that!

Nov 6, 2017admin
Benchmarking: There is No Single Best WayARI to Introduce Alexa App Pilot at Annual Best in Fleet Conference

Volvo Using Technology To Cut Down On Distracted Driving — Due To Technology
Your Dog Needs To Buckle Up. Here’s Why