The Next Advance in Fleet Communication Efficiency: ‘Conversational Systems’ 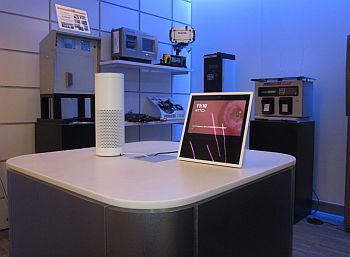 Imagine you’re a fleet manager with a diminished support staff, and today you’ve received dozens of phone calls from drivers asking to replace a lost fuel card, fielded dozens more from drivers who want to know when their new car or newly upfitted truck will be delivered, and called a few dozen more who have yet to renew their vehicle registration. Meanwhile, there are few hundred drivers coming up to their next due date for routine vehicle maintenance and you know a bunch are going to forget to make their appointment.

Finding this hard to imagine? Not likely – all too easy instead, right? Two-way communication with drivers is one of the most important aspects of fleet management, and person-to-person telephone communications can be an unwieldy and ultimately ineffective solution, especially when they involve transactions that can only be turned over to be completed by a third party, your fleet management company. Might there be a more efficient way?

ARI thinks there is, and it’s pioneering the adaption of “conversational systems” – interactions between humans and computers that rely on common, natural language – to improve the efficiency of fleet communications.

The fleet industry is not the place where you find innovations in technology. That’s for Silicon Valley. But once innovations invented there take hold, the most forward-looking fleet management companies and related service providers invest millions to adapt them.

So it is with ARI which, like its leading competitors, continues to invest millions every year to adapt proven information technology to the fleet industry. Apart from a defensive strategy to remain competitive, the technology increases the productivity and so reduces the costs of doing business both for themselves and their customers, which are under constant pressure to reduce costs and accomplish more with less.

ARI took the wraps off its project to bring conversational systems to fleet at the Work Truck Show in Indianapolis last month. Peter Nogalo, ARI’s marketing manager, introduced its presentation by stating that the company’s goal “is to enable fleets and their drivers to obtain any kind of information, any time they want it, through any kind of device.” In truth, however, its goal is more than that, as revealed by Don Woods, ARI’s director of client information systems: to enable fleet managers and drivers to conduct transactions on a timely basis in a minimal amount of time and with minimal effort.

The latter is the goal of one of two conversational systems ARI has been developing in a pilot program involving some of its own employees and a handful of fleet managers for some client. Woods referred to this one as the company’s “Chat Bot” or “Text Bot.”

An example he offered was a text sent out by computer to a driver’s smart phone, advising the driver that, because of the odometer reading, it’s time to schedule an appointment for preventive maintenance. If the driver responds to the text positively, the system, which “knows” the driver, suggests an appointment at his or her preferred service station, and with the driver’s approval, books the appointment – all without any time-consuming, multiple phone calls with an overburdened human at either the fleet department or fleet management company.

ARI’s second pilot involves Amazon’s Alexa, the virtual, personal assistant that listens and talks. Alexa is already enabling people to change the radio station they’re listening to, shut off lights or change the temperature in a distant room, recite the news and weather and even help you do your shopping completely by voice command in ordinary, everyday language. These functions are referred to as “skills,” and at latest count Alexa can perform more than 15,000. Alexa is also widely accessible, as it can be paired with a desktop computer, tablet or cell phone.

In the first phase of ARI’s Alexa pilot, the company enables fleet personnel to access ARI insights, the company’s client information platform, to ask for and receive recited reports at several levels of detail on fleet metrics of their choice. Woods played this example of an interaction between a fleet manager asking for a daily fleet report and Alexa.

Fleet manager: Alexa, give me my ARI briefing.

Fleet manager: Tell me about my fuel tank violations, Alexa.

Alexa: There are nine suspicious fuel events in the last 30 days. Would you like me to email a list?

Woods explained that ARI’s Alexa system can be customized to each fleet, so it only reports on given items and only when numbers reach predefined thresholds or over predefined periods of time. In addition, as the example illustrates, the fleet manager can ask Alexa to email a list with details for the manager to take further action.

Woods explained that the next phase in its development project is to program Alexa to take further actions toward resolving the problem it- (her-?) self. And when could ARI’s customers expect to see these features roll out? Before the end of this year, he said.

The advantage of the greater efficiency of these system redounds not only to the fleet department or fleet management company, Woods remarked, but to the drivers themselves. Averting games of telephone or email “tag” and expediting the processes makes for happier drivers – something every fleet manager strives for.

It’s a brave new world there, folks. Conversational systems are yet another step forward in making the fleet world braver and newer. Enjoy!

Apr 26, 2018Janice
Autonomous Vehicle Makers Need to Slow DownARI Recognized as One of the Best Workplaces in Canada for Second Consecutive Year