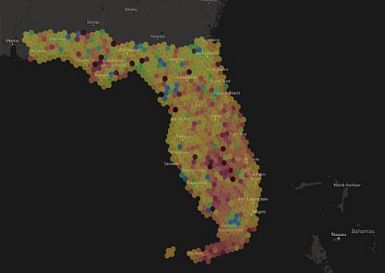 By now, most fleet managers are familiar with many of the potential benefits of telematics. Among the most well-known are real-time reports on where their vehicles are, how many miles they’ve logged, engine trouble monitoring, and assessing driver behavior for improved fleet safety.

But how many know that telematics can also help fleets be prepared for hurricanes and other weather emergencies? That came to this writer’s attention last week when Geotab reached out about a blog on its website with the headline, “Florida prepares for Hurricane Dorian: real time data insights.”

And here’s the blog’s main point: according to Geotab’s data, Florida fleets were 7 percent more prepared this year for Hurricane Dorian than they were last year for Hurricane Michael, the first category 5 hurricane to strike the U.S mainland in 27 years. Michael hit Florida’s panhandle in October 2018 and went on to kill 74 people and cause an estimated $25 billion in damage.

There may be several possible measures of fleet hurricane preparedness, but the one Geotab focuses on has to do with how many vehicles have enough fuel in their tank to travel hundreds of miles in the event that the storm cuts off their ability to refuel, a metric that Geotab’s system can capture and report. And for Geotab, a fleet is properly prepared if more than half of its vehicles’ fuel tanks are at least 50 percent full.

So, Geotab found that for Dorian, 95 percent of all of Florida’s geographic regions (as defined by the company) had more than half of their vehicles’ fuel tanks more than half full, compared to 88 percent before Michael hit the state. Geotab published the blog on August 31, when Dorian was still projected to hit Florida directly; two days later, it only grazed the state’s coast coast as a category 4 storm but went on to wreak havoc in the Carolinas.

“When there’s a hurricane, fleets need to know that their vehicles are capable of operating for hundreds of miles over several days to evacuate endangered areas and to help victims of the storm,” said Bob Bradley, Geotab assistant vice president for data solutions, in an interview with FMW.

Bradley said that Geotab offers fleets the ability to receive real-time reports on the state of every vehicles’ fuel tank, and even has the optional capability of sending out alerts to everyone, from the fleet manager to depot managers and drivers themselves. The advantage, of course, is that the reports give fleet drivers the opportunity to fill up their tanks before a hurricane strikes.

Geotab has been talking about its ability to provide weather alerts for some time now and is working on rolling out some more. Currently, it can report on ambient temperature for each connected vehicle, so it can tell whether precipitation is likely to be rain or snow. Bradley said the company is also working on an algorithm based on how many vehicles have their windshield wipers in operation so it can track the progress of storms down to a very fine geographic resolution.

Sep 15, 2019Janice
Success, and the Willingness to FailOil Prices Soar After Attacks On Saudi Facilities